In two weeks time, I crawl in Chinchin, and move away from the place I’ve called home for the last 14 years. I’ll admit to mixed feelings. San Francisco has managed to hold onto a few lovely corners, is still pretty on a sunny day, and it full of houses and people that make me smile. I have met amazing people here, and will miss them. This city is done for me though. I’ve been ready to leave for awhile, and with my family already gone, I’m anxious to get a move on.

Poor Chinchin, she’s not a city girl. Someone thought she was abandoned, so she got towed. Her windshield was cracked in the process ($400 to replace, to which the city has failed to respond to my claim), and it cost me $1000 to get her out of jail. She’s as anxious to go as I am, or maybe I’m anthropomorphising my car. Either way, time to get her in running order, get my bags packed, and get out of Dodge.

I started by having my neighborhood mechanic give her a once over. The only big work he’s doing is replacing the tie rod ends. As long as I’ve had her, Chinchin’s steering has been pretty sloppy. Hopefully this will tighten things up a bit, so I can keep her in a lane when it is windy.

My friend Ms. Danger has decided to come along for the ride north. I’m 99% sure she doesn’t know what she has gotten herself into, but I’m sure we’ll have fun regardless. The trip is timed so that we can catch the Eclipse in Oregon. That is, if traffic isn’t horrid. I decided Prairie City, OR was the place I wanted to aim for to catch the totality.  I went to book a camping spot, and all that was left were spots in a farmer’s field with no amenities other than space, for $175/night. I can’t begrudge a guy trying to make a buck, but, no thanks. About an hour and a half south, in Burns, OR, I found “one of the last few spots” at a place that has hot springs and is only $25/night. Hopefully an early morning drive will get us to Prairie City in time for the eclipse, without too much traffic.

When I was calling around, and reading articles about the Eclipse, there were lots of warnings about showing up with food, water, etc., because tiny towns can’t promise to be fully prepared. Space is certainly at a premium in Chinchin, so I decided getting the fresh water system in order was a good idea. No need to take up space in the storage areas with bottles of water, when we have a tank that can hold a few gallons. I crawled in the back and inspected the system. GAG. Pipes that were supposed to be clear, looked opaque black. Pipes are easy enough to replace, but when I started following what pipe went where, I realized Chinchin didn’t come with the “city/shore” fresh water hookup option. All she has is a gravity fill spout into the fresh water tank. This also means her faucet isn’t designed to connect to city water. It is a simple diaphragm pump, and the PSI of a city water connection would just cause leaks and breakage. 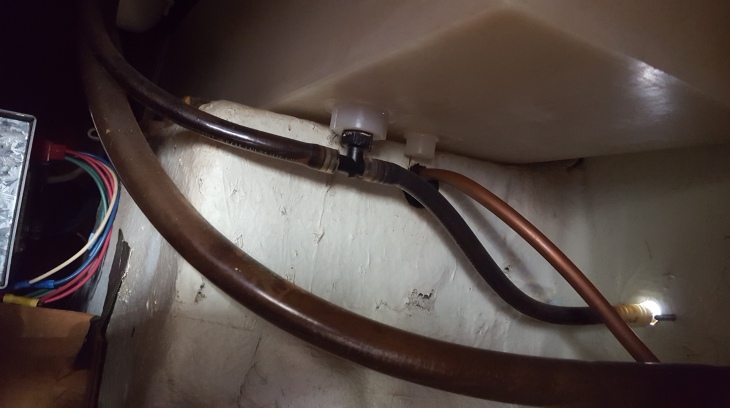 Harrumph. One easy fix would have been to switch out the faucet for one designed to be a manual pump AND handle the pressure of city water, but I could only find one type available (the exact same one they were offering in 1976). The reviews for it were bad, and every site sold repair kits. I would also still have to install a city water connection. I decided there had to be better options.

Also, I love solving problems and designing systems, so off to the drawing board-google search-avalanche of shipping boxes I went. What I have come up with will allow for city water and/or a foot operated pump to pull water from the fresh water tank. I won’t list out all the parts here, because I’m not sure it will work yet. I’m hoping all the parts will arrive and I can put it together this weekend. If it works, I’ll put up another post with a full description and parts list. As you can see below, there will be lots of adapters. 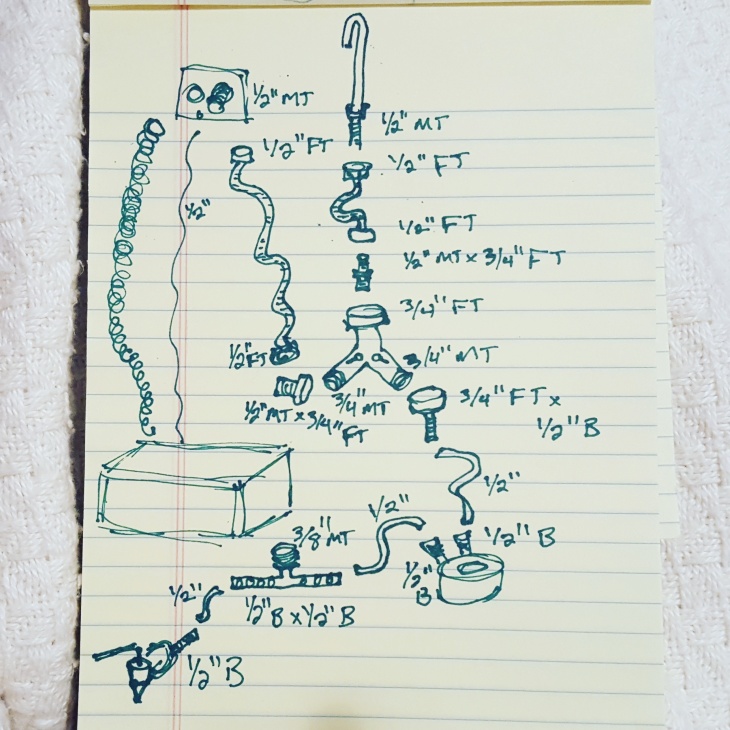 I was also hoping to get the electrical revamped, and the “hammock” bunks installed before we take off, but both of those seems highly unlikely at this point. C’est la vie!