I went to dinner tonight with one of my best friends, Mr. Urbane. We haven’t spent much time together over the summer, so we were catching up. He explained he’s been having trouble sleeping. I asked if there was perhaps something making noise, or if the street lights were waking him up. Honestly, I suspect it is his busy mind and contrary body waking him up at night, but I care, so I always want to help.  When he was dropping me off at home, I asked if he had an eye mask and earplugs to experiment with reducing disruptions at night.

I ran in the house, and quickly grabbed the box I knew had travel supplies in it. Sitting on top was a cardboard box that proceeded to leap out of my hands, and spray the contents across the floor. It was…wait for it…a box of cassette tapes. Chinchin has a cassette player, so I’ve been saving them for the next trip.

For those of you who are too young to know, it used to be a common and significant thing to make someone a mixed tape. It was, in today’s parlance, making a playlist, except it was arduous work because you had to collect the various tapes, CD’s, vinyl albums, etc., and painstakingly go through adding all your songs in order on the tape, trying to get the timing between songs right. On top of that, if you really cared, you had to make a cover for the tape. 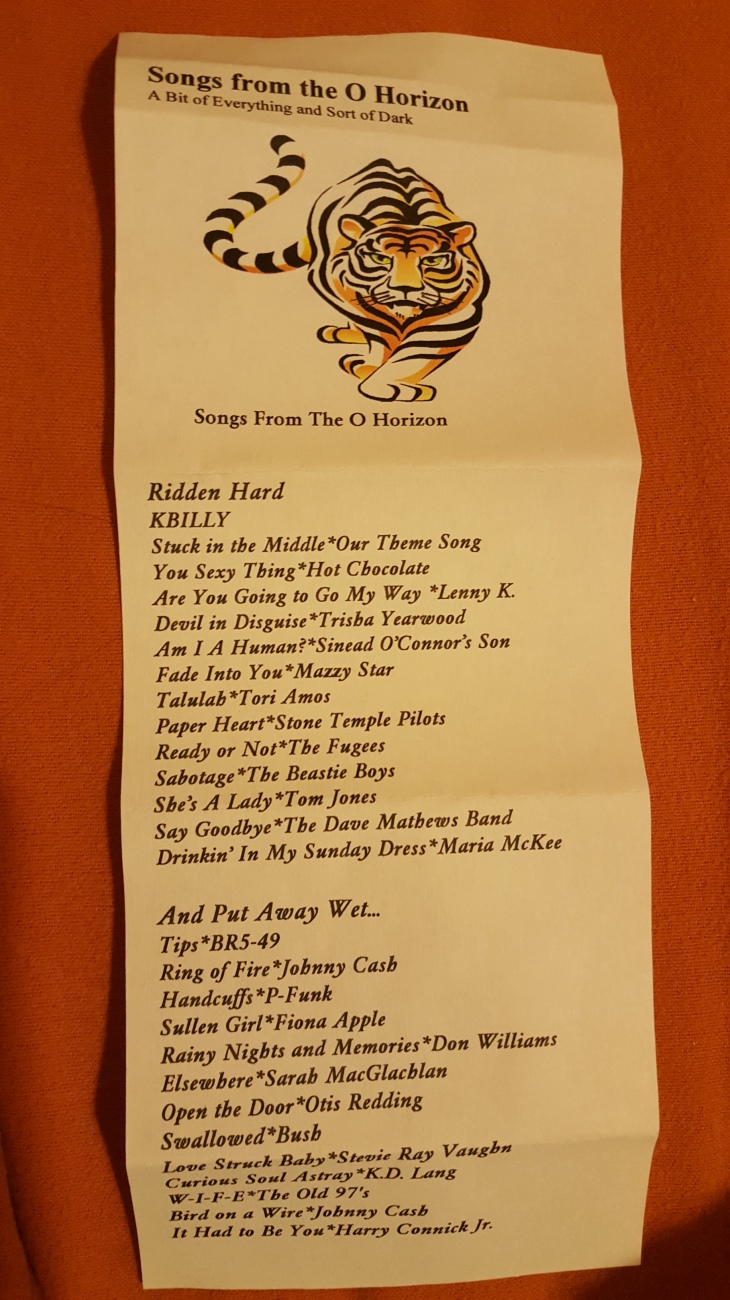 One of these treasured mixed tapes tumbled out of the box tonight. A little nugget of my history. This was a copy of a tape I made for someone else. Someone I was saying goodbye to, and I made myself a copy with the romantic idea that we might be listening to the same songs as we parted ways, most likely forever.

By someone, I mean a man. I’m not sure how to describe our situation, other than, it shouldn’t have been a situation in the first place, but we sure had a heck of a lot of fun together.

As only one can in their 20s, we had electric, forbidden fun. Days of dancing around each other all day at work, nights of too many cocktails. He and I knew it was never going to last, so we had the freedom to be open, be fun, and be so perfectly imperfect with each other that we could actually enjoy and get to know one another.

Then it was time to go. I was leaving the state for an adventure, and he was returning to his forever life. I needed to find a way to let him know how much fun I’d had, and say thank you. So I did what 22 year olds do, or at least did then. I made a mixed tape. This was the late 90s so it is a mix of things we loved and were familiar with; part Lilith Fair, part funk, and part classic country, with a tiny touch of post grunge.

Twenty years later this tape fell out of a box at my feet. All the songs are still familiar, and I wonder what happened to him. I wonder why him in the first place. He was funny, tall, self-deprecating, was the adventurous black sheep in a conservative family, and never once foisted some version of an ego trip on me. He didn’t need me. He just enjoyed me, and I just enjoyed him. He was unexpected, and did unexpected things.

I’ve replicated the playlist for your listening enjoyment here. There are only three things that are different.

* The first song contained the full KBLY intro before Little Green Bag, which was from the Pulp Fiction soundtrack.

* The version of Devil is Disguise I put on the tape was Trisha Yearwood, I’m not sure why. The Elvis version is infinitely better.

* After Sullen Girl on the tape, there is a song about saying goodbye by Don Williams, called Rainy Nights and Memories. At the time, I certainly didn’t feel like I could express too much remorse over saying goodbye, so I let this song do it for me. I didn’t even go see him when he asked me to the last night we were in the same town.

Present day me would never put Dave Matthews in a play list, but this song was just right for the situation.

A note on the cover: I called it Songs from the O Horizon because I was an environmental studies nerd. The O Horizon is the layer of soil that is mostly undecomposed organic matter. Full of unrealized potential. The sides were “Ridden Hard” and “And Put Away Wet” because one night he told me that’s what I looked like after a very long week. He was very real. It has a tiger because, surprisingly, he had a motorcycle with tiger print on it.

I hope you enjoy this walk down memory lane as much as I have.